REVOLUTIONIZING
THE WAY WE KEEP OUR
AGRICULTURE HEALTHY.

The Soilcares Foundation, affiliated with Wageningen University, asked Scope Design to take the lead in the development of a soil scanner. With this, farmers can quickly gain insight into the soil condition and then adjust the planting and fertilization accordingly. Scope Design developed both the complex technology in the scanner and the robust, dust- and watertight housing. It generated enthusiasm from the client and users and a Reddot Best of the Best for the technology and design. 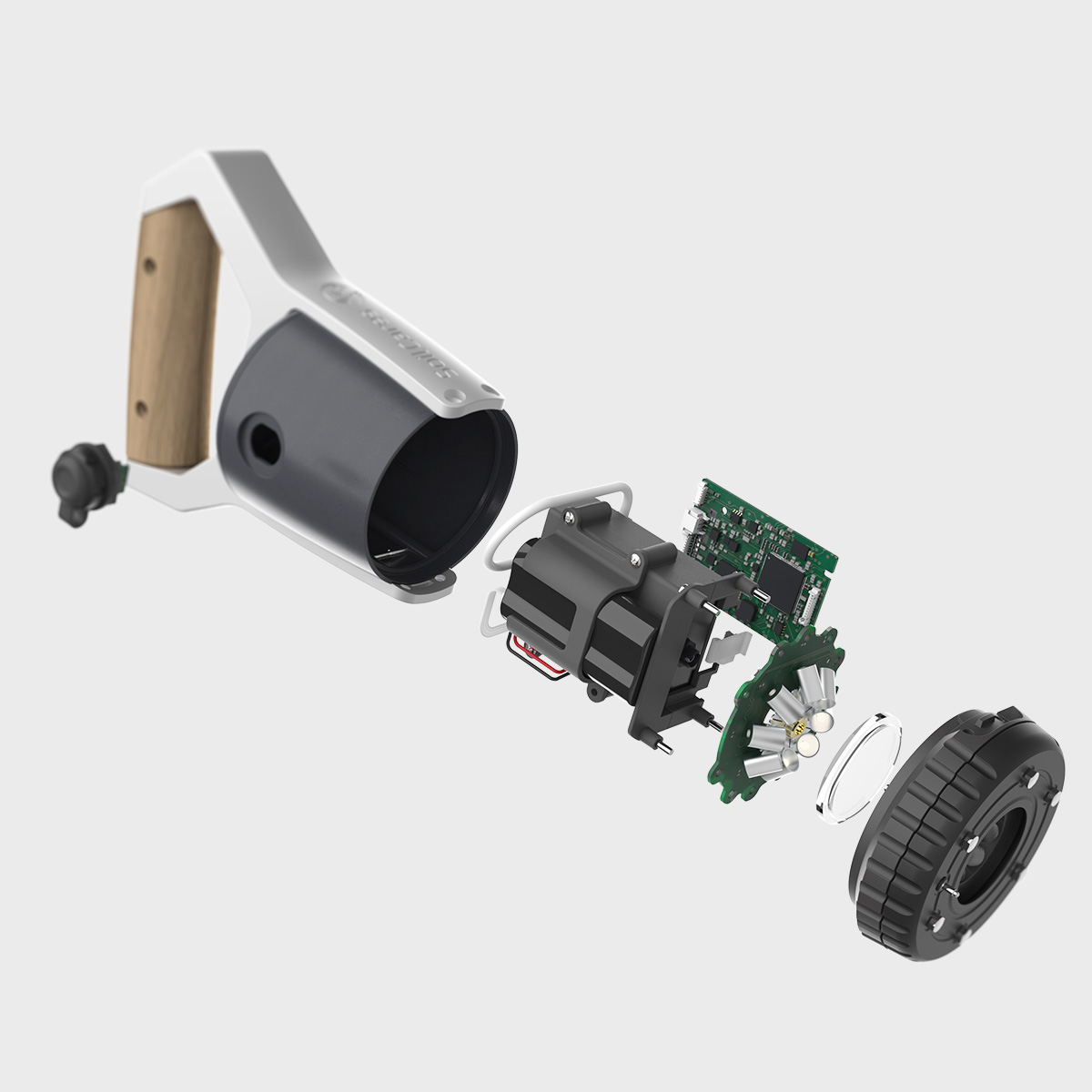 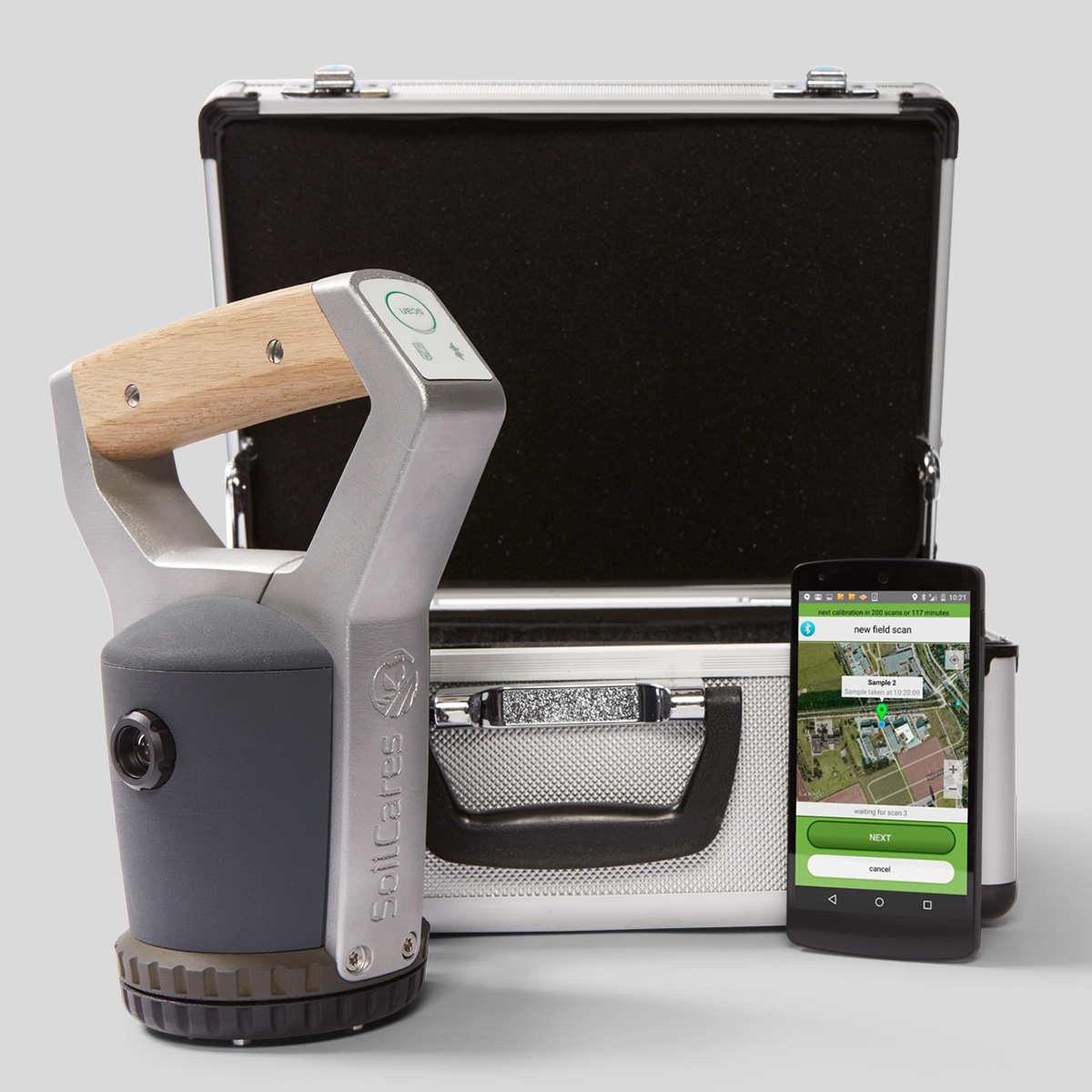 Scope Design took the lead in the soil scanner to be developed. With this soil scanner, farmers can quickly gain insight into the soil condition and then adjust planting and fertilization accordingly. One of the challenges in this assignment was the heat generation in a closed housing of the scanner, which is also used in extremely hot conditions in developing countries .

the approach of the project

Scope provided project management for the Soilcares Foundation as well as central project communication between international component suppliers, electronics developers, detail engineers and the design team . In the development of the Soilscanner, an electronic product, the completely dust and waterproof (IP65) housing was a first important specification, as the scanner is used on land in hot, dusty conditions, in wet rice fields or a muddy environment.

Making a dust-proof product is also important for obtaining correct results of measurements. Disruptions to the analyzes due to the measurement of dust particles must be prevented. 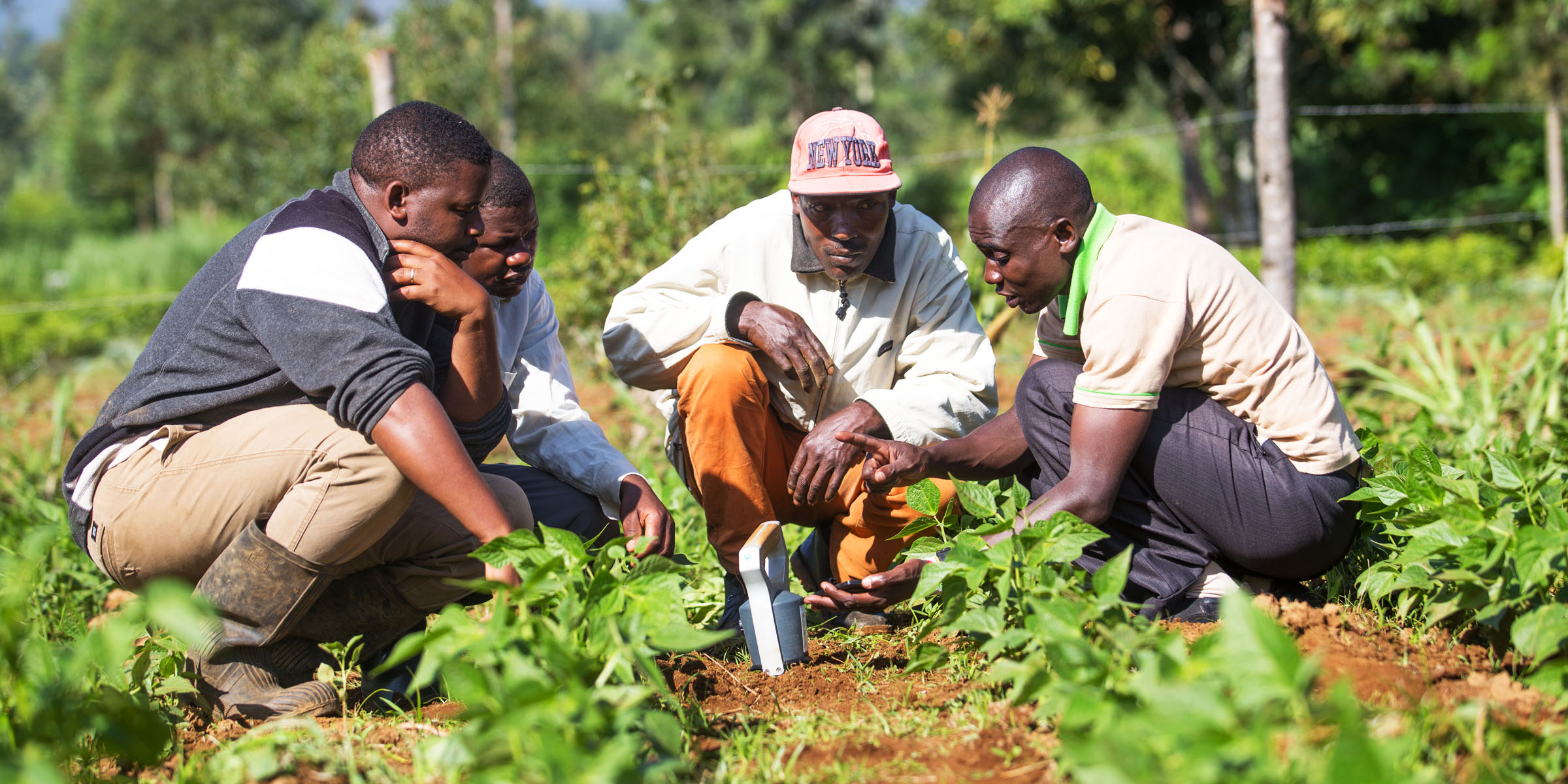 At the start of the project, a precondition was therefore chosen in the design that was used. By designing with circular seals , the dependence on clamping or closing force decreases and there is more control over good dust and water tightness. In this way we limit the risks in the engineering and we achieve reliable functionality.

In the final version of the soil scanner, sensors protrude from the bottom of the scanner to measure soil moisture and temperature. The design has been updated for this with an equal watertightness and an electrical insulation for the moisture measurement.

The complete closed housing of the scanner contains a light source, which briefly produces extreme heat during a soil analysis. When the scanner is used in countries where the outside temperature increase considerably, this is an additional challenge with regard to heat regulation. That is why the eight components that make up the light source consists of one aluminum housing, which extends up to and including the handle. The total surface forms a "breathing surface" for the necessary heat emission. The wooden handle in the handle prevents gripping the scanner from becoming uncomfortable. At the same time, the use of metal in the housing reinforces the robust appearance of this product; A good example of ours integrated approach for design and function. 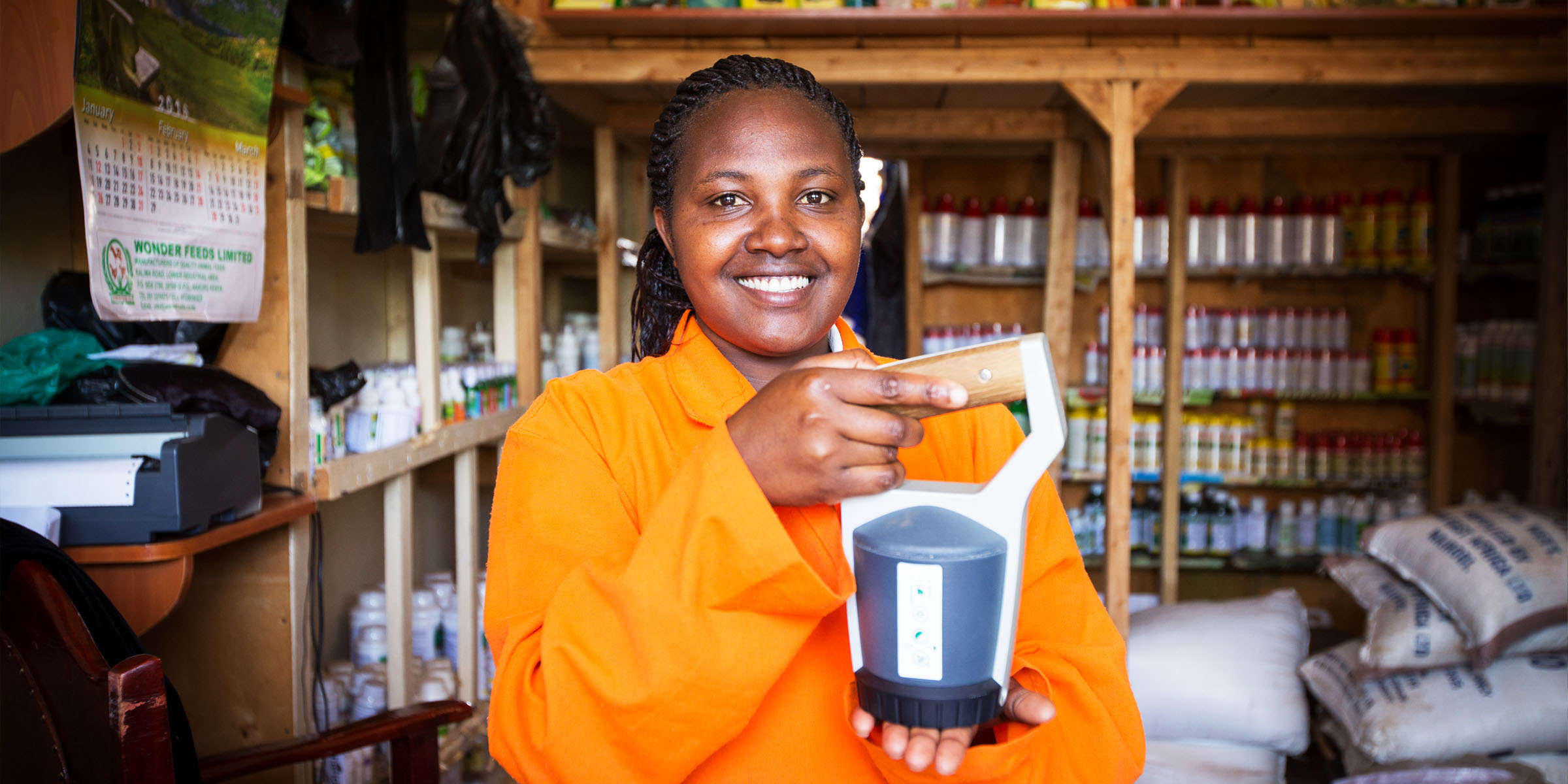 In addition, we have designed a completely new and very cost-efficient light source , which together with the optical mechanical sensor forms the heart of the scanner . Using different types of infrared lamps, Scope has designed three or four versions of a new light source and made functional prototypes of these. The prototypes were tested by the scientists within the project team (affiliated with Wageningen University) to determine the correct design of the light source. The result was technically so innovative that Soilcares was able to patent it.

During the development has always been looking for ways to make the use of the scanner as simple as possible, so that the analysis can be carried out easily. To certain functions the app to move one button on the scanner was enough, that makes the scanner "Easy to Use." 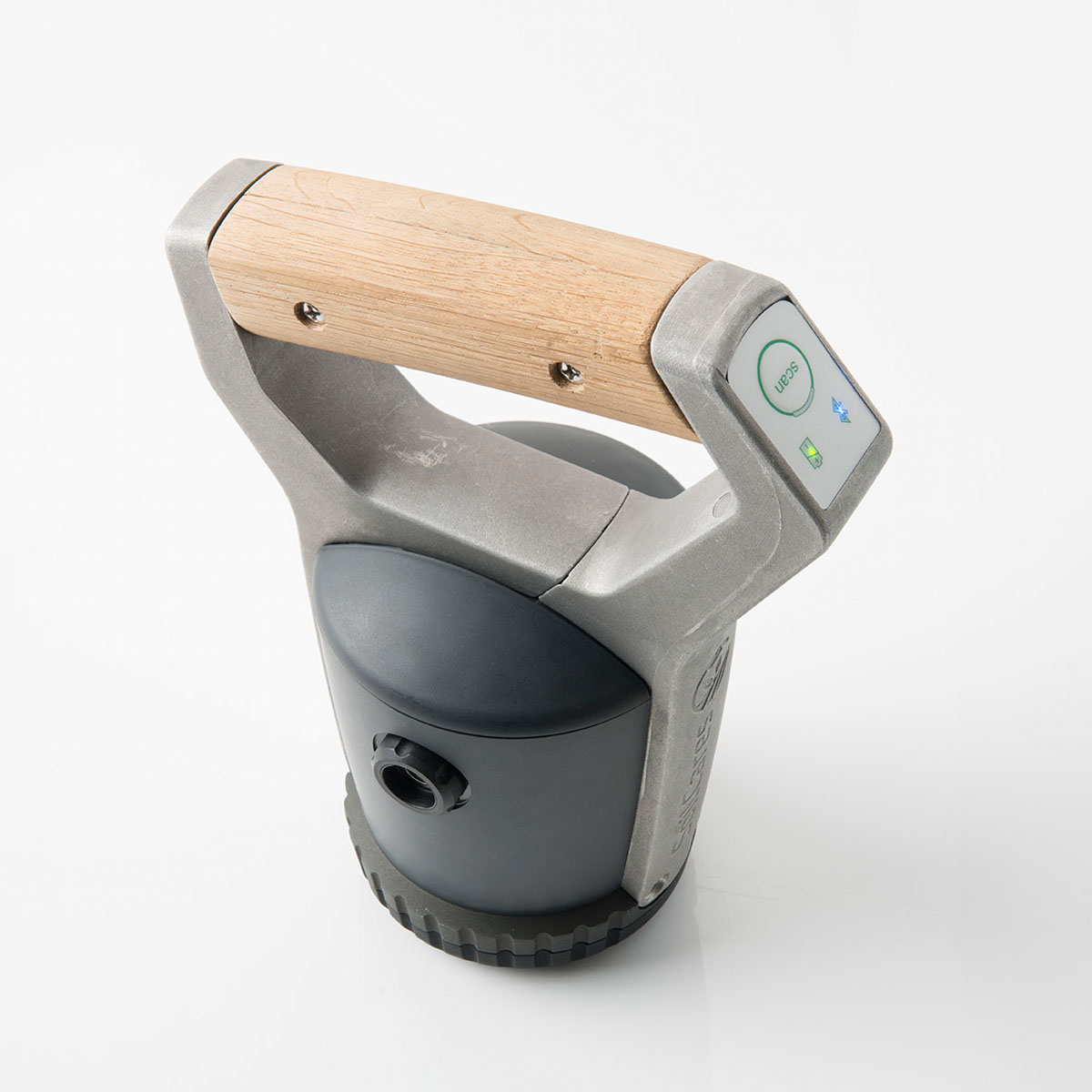 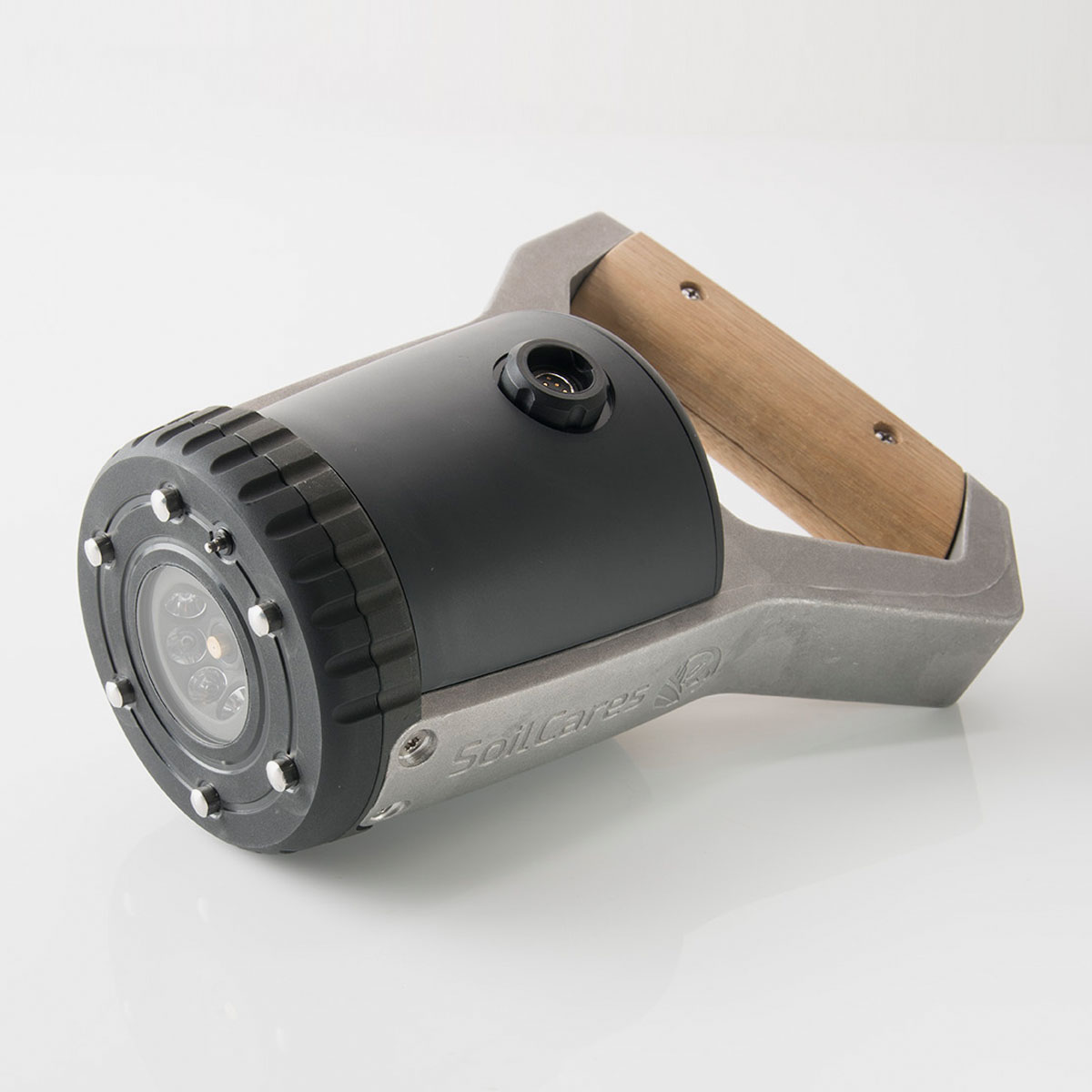 During the development of the scanner, Scope made two functional test series to be able to test the operation and use of the scanner on location in Kenya. The first functional model incorporated an existing sensor and light source . With this, the entire system and the context of the scanner were tested in Kenya, such as sending information, the calculation modules , the app, etc.

The second working test model was based on Arduino and contained the new light source designed by Scope and much cheaper to manufacture. This model mainly served to test the thermal management, the required robustness and other design assumptions, such as the construction with the metal housing and the charging . In the end product, the electronics are final and optimizations were performed on the calculation modules, the embedded software and the app.

Extensive testing in Kenya (and later also in other parts of the world) yielded valuable feedback and interesting points for improvement, such as the ergonomic improvement of the handle angle. An intuitively fitting grip for scanning soil turned out to be different on site than was designed in the model at the time.

Testing the functional models on location with future end users ensured that a very well- fitting end product could be delivered. A complex challenge given the many new components and functionalities and the very challenging conditions in which the scanner is used.

It generated enthusiasm from the client and users and a Reddot Best of the Best for the technology and design. 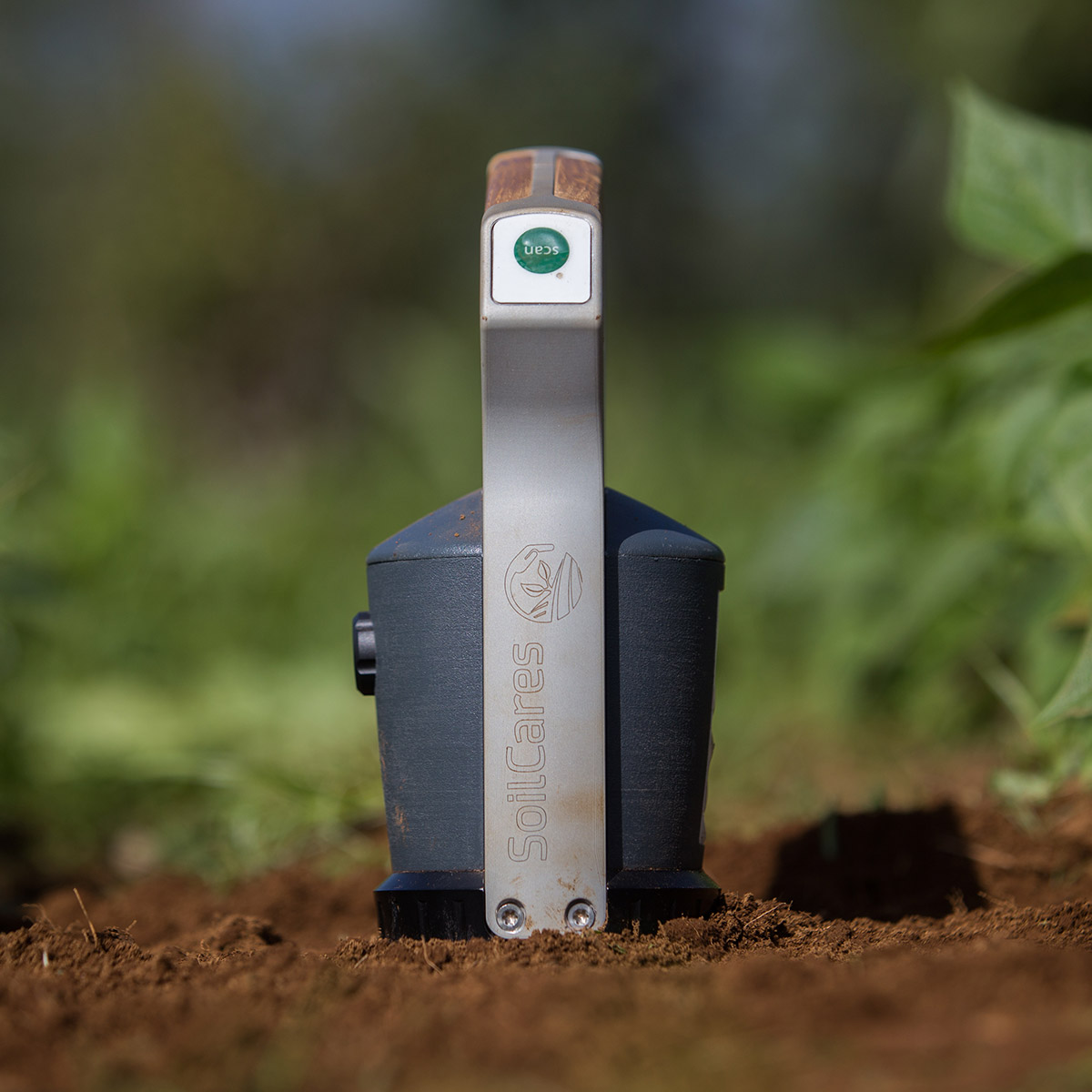 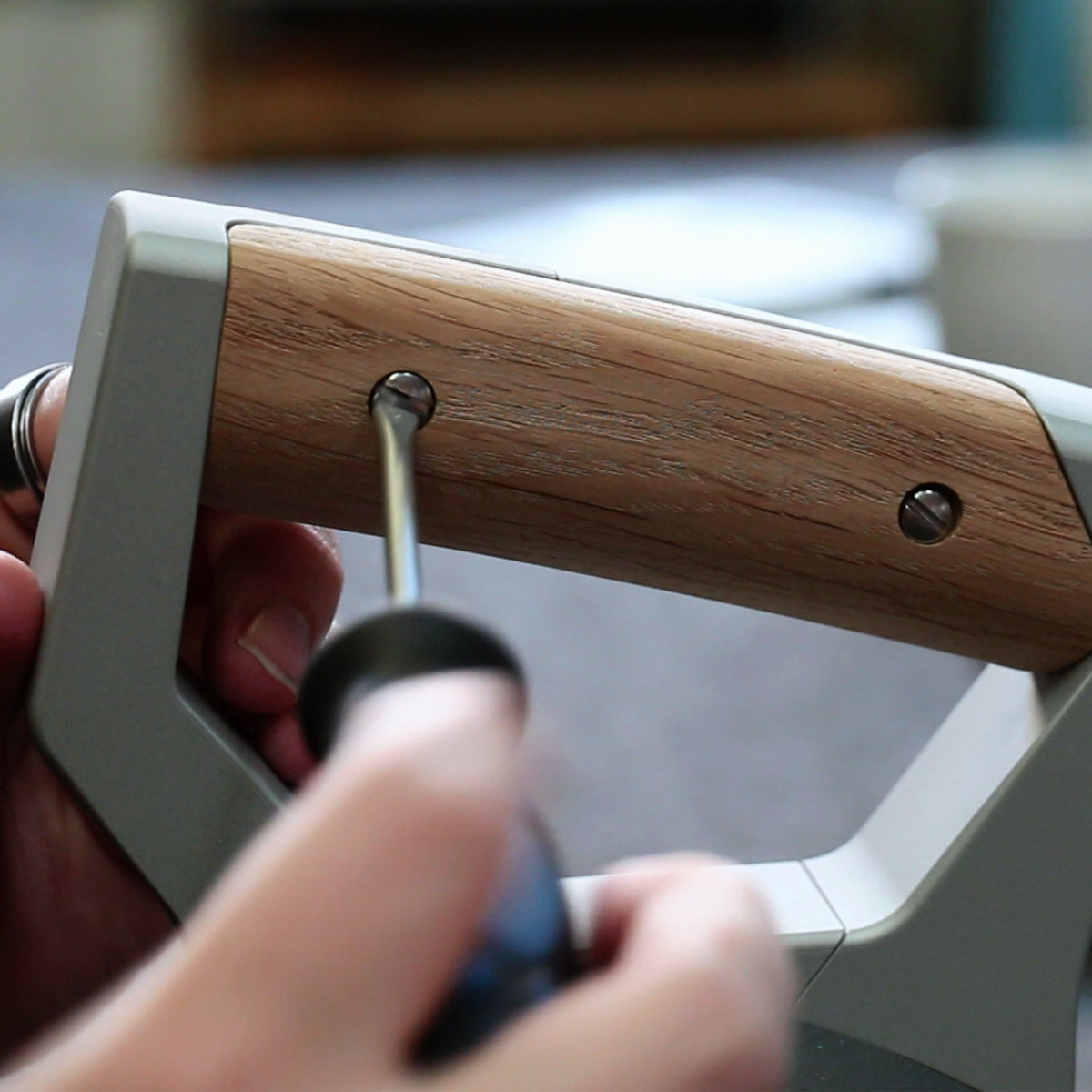 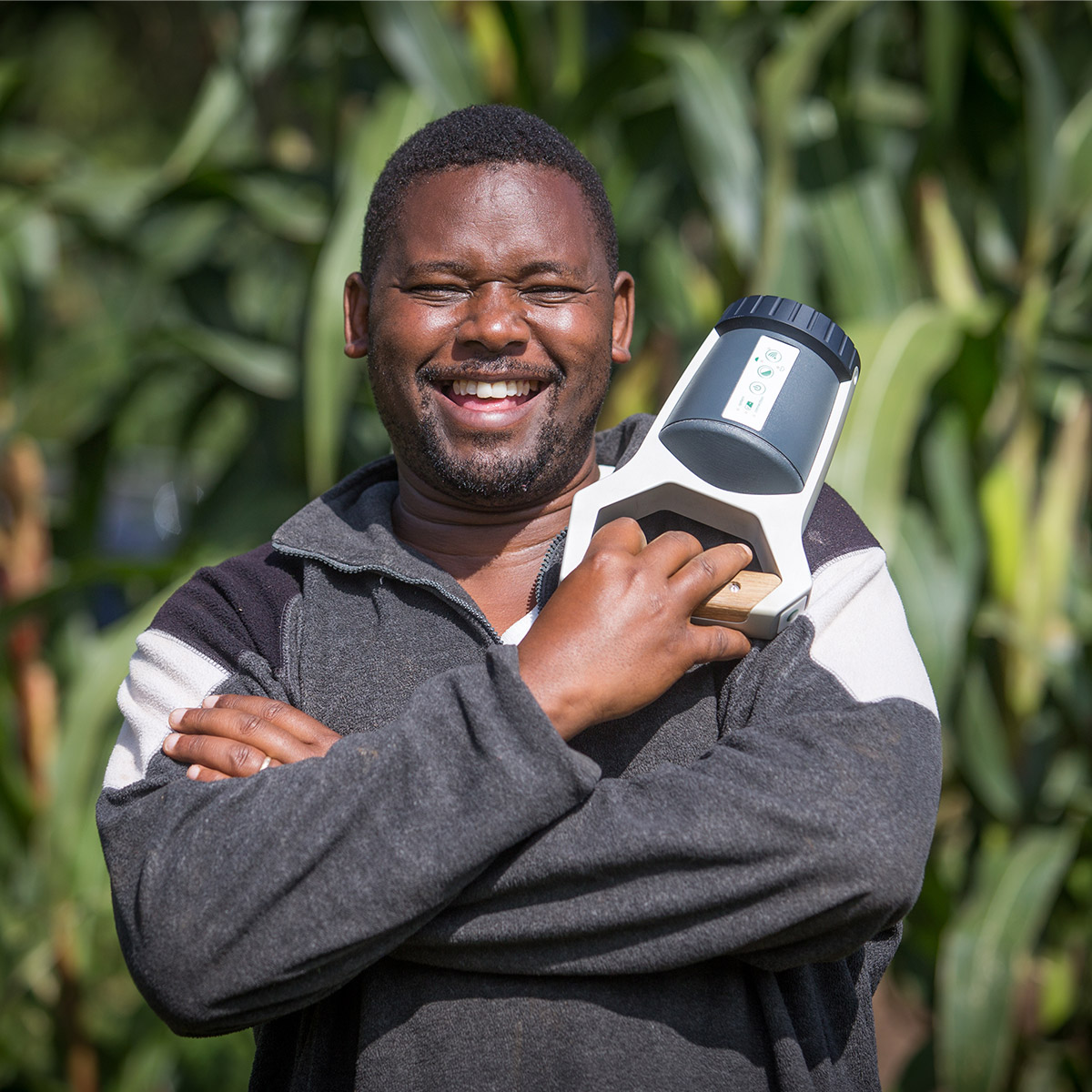 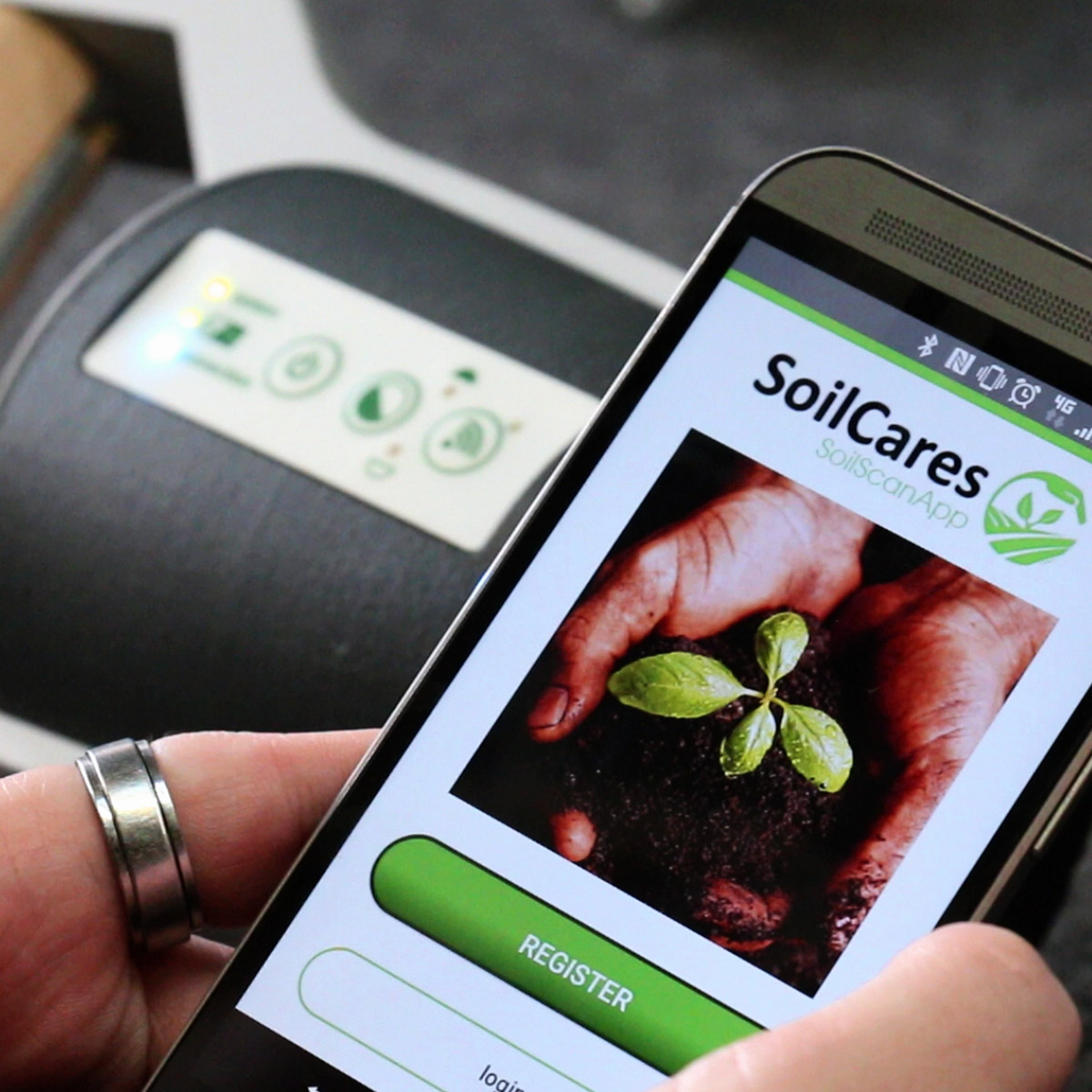 This website uses cookies to improve your experience while you navigate through the website. Out of these cookies, the cookies that are categorized as necessary are stored on your browser as they are essential for the working or basic functionalities of the website. We also use third-party cookies that help us analyze and understand how you use this website. These cookies will be stored in your browser only with your consent. You also have the option to opt-out of these cookies. But opting out of some of these cookies may have an effect on your browsing experience.
Necessary Always Enabled
Necessary cookies are absolutely essential for the website to function properly. This category only includes cookies that ensures basic functionalities and security features of the website. These cookies do not store any personal information.
Non-necessary
Any cookies that may not be particularly necessary for the website to function and are used specifically to collect user personal data via analytics, ads, other embedded contents are termed as non-necessary cookies. It is mandatory to procure user consent prior to running these cookies on your website.
SAVE & ACCEPT